The Buffalo Sabres are still undefeated when either Alex or I attends, which is awfully thoughtful of them! (And maybe we should start charging them.) A good evening, complete with food and beer at Pearl Street before the game, and Mighty Taco afterward. I also now have another piece of Sabreswear, one without a turtleneck! (It seemed a bit warm for that today.) 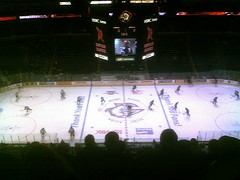 First of all, here's a picture snapped on my cell phone from our seats, in the very back uppermost row of seats in HSBC Arena! It's the second time Alex and I have sat in the back row; the first time, we think Joe Nieuwendyk was nearby. We're not sure it was him, but it was an unscheduled night for his team, which was playing not too far away in another day or two.

Even though we were far away, we had a great view of the action. Mostly unobstructed, and just a little odd in that I'm not used to seeing hockey from that far overhead.

My boss telling me I didn't need to stay for the weekly staff meeting, for which there was no real agenda, meant we made it to Buffalo in plenty of time for a full meal at Pearl Street Grill & Brewery, rather than just a quick beer before the game. Unfortunately, they seated us upstairs without telling us that limited our menu choices, so we were not permitted to order soup. And, they were out of Kimmelweck rolls, so we couldn't have beef on weck! My first choice would've been wings and beef on weck, but since I couldn't have that, I would have leaned towards wings and their excellent beer and cheddar soup... if we were allowed soup. So I ended up with wings and pot roast, which worked out OK. The waitress was actually nice and charged me only for the lunch portion of the pot roast, even though she'd said she couldn't. No idea if what I ate was a lunch portion or the full size; I had plenty to eat.

The beer sampler was pretty good; six small cups. They were out of one of their beers, the Lake Effect, so they substituted Stella Artois as the sixth cup. Just one of several small factors conspiring against us at Pearl Street! It wasn't disastrous, just frustrating.

Who knew... Eric is actually a serious New Jersey fan! It was amusing seeing him leap up to cheer when the Devils scored their lone goal of the night. Happily, the Sabres scored more than once.

Impressive how many people in the crowd were wearing jerseys; I think it was a lot more than the previous times I've been there. No idea why. The two kids at the table near us at Pearl Street were even wearing tiny adorable hockey jerseys. One guy was wearing a Cornell jersey, and pumped his arm when I yelled "Go Red!" out the car window in the parking lot after the game. I thought about buying a jersey but didn't; the really nice ones are really expensive. I did get a new fleecey Sabres sweatshirt, though, which I wore the rest of the game.

As for the subject of this post, I was relieved to discover that Mighty Taco still has loganberry soda, even though it wasn't visible on the menu board or on the little stickers on the soda dispenser. The Super Mighty burrito and the Mighty Taco were good, but I live for this periodic dose of loganberry soda! You can really only get the stuff in Western New York.

For those who aren't familiar with Mighty Taco, it's a Buffalo-area chain. Imagine a similar menu to Taco Bell, but made from actual food.

belmikey for pointing out this editorial advocating a constitutional amendment enumerating the right to privacy that's largely assumed to exist, but really doesn't.

Always one of my favourite cats.

I'm glad I got to visit her, her sister, and their humans in Minnesota.

Congrats to my brother!
Collapse