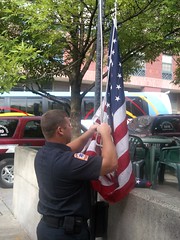 Retiring the Colors at the Nines
Originally uploaded by mhaithaca.
Ithaca Firefighter Jason Fulton retires the flag that was flying over Ithaca Fire Department Station #9 on 9/11/01, and was ceremonially flown this morning.

Rather than go to Central for this morning's main IFD ceremony, I decided to go to the Nines, where I correctly suspected there'd be a little less hoopla. I've been to the ceremony at Central a couple of times, and decided to try something else for a change.

Today actually marks the fifth anniversary of 14850 Today, an entirely online news source in conjunction with WVBR. (It's also now available on LiveJournal at

14850today.) It's something we had in the works that summer, and it got pressed into service ahead of schedule when we clearly needed a way to get information out. The first few items were about blood drives, gatherings, and ceremonies.

I spent most of 9/11 on the radio, and didn't go to my day job for even a moment. That afternoon, I joined a few friends at Moonshadow, a downtown Ithaca bar, where we had some beverages and then got some take-out Thai food. It's not a bar I go to often; don't recall why we went there that day. Maybe it was Kim's idea.

Happy birthday, Maddy! Wow, she must be ten... or is it nine?

This is somehow the only picture I'm managing to find of her. I know there's a great one of me holding her as a newborn, but I don't seem to have a copy of it readily at hand.

Just noticed, just in time, that tonight's premiere edition of "Monday Night Football" on ESPN begins at 7pm EDT! There are two games, scheduled at 7:00 and 10:15, so both east and west coast viewers have prime time football to watch.

Told the TiVo to start recording, and I've fired up the grill to make some burgers. Couldn't resist the urge. Join me!
Collapse