One-time Cornell student Ron Moore, executive producer and screenwriter of "Battlestar Galactica," spoke on campus this evening, so a bunch of us went to see what he had to say. He's a very good speaker, and handled a lot of Q&A well afterwards. I got the feeling he would have kept taking questions for another hour, but they had to clear the theatre for a 7pm movie screening. He hadn't been back to Ithaca in twenty years, but I'm hoping he doesn't wait as long for his next visit.

I had actually interviewed Ron for a fan newsletter on the order of fifteen years ago, and he even subscribed, giving me his private mailing address but asking me not to share it. I remember him being well-spoken then, too, but I think he's clearly come a long way in his vision and the way he executes it.

As a producer of "Star Trek" and "Carnivale," he's had some practice with future and past, so I asked him if there are any other past, historical periods he'd like to explore in a future project. He said he's always wanted to do something about Benedict Arnold, but no one seems ready to bite. Everyone knows the name, but very few people know all that much about the man. He was seeing the daughter of a prominent Tory family, which you can imagine would have had a lot to do with the choices he made.

After the talk, Dan and Marie and Dave and Will and I headed down the hill for dinner at the

Ithaca Ale House, where we were joined by Alex and Denise. I was really pleased to see the chicken stirfry spring rolls have been added to the menu! Those are spicy and crisp and delicious, and you should try them. Carl had sent these out for Molly and me to try several weeks ago when he was testing them, and I'm glad they finally made it to prime time. Four of the seven of us had the chicken fried steak special, which was outstanding.

Denise had poor Ian's collar in her pocket. I had known he'd vanished a few days ago, but I was hoping to hear he'd wandered back home. Unfortunately, as I learned this afternoon, he's not coming home. I was really upset by the news, and went for a walk rather than continuing to sit at my desk. As I thought about it, I figured Ian's probably the cat I've gotten to know best, since Denise got him when we were living next door, and I visited lots, played with him lots, and took care of him when she was away. He was sweet and annoying and fun and a pain, and I'm going to miss him.

"It probably means that the choice of the next American president will be taken out of the hands of deep-pocket, autofellating, corporate shitbags and put it into the hands of some teenager in Finland. How is that not an improvement?" 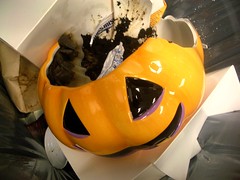 I am Jack's Shattered Dreams
Originally uploaded by mhaithaca.
Couldn't help but snap a picture of this poor fellow I spotted in the kitchen garbage can at work. He must have been holding Halloween confections earlier. No idea how he met his fate. 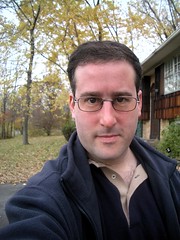 My Costume
Originally uploaded by mhaithaca.
Guesses welcome! I had one thing in mind (and would have gone at it differently if it weren't so warm today) but have heard a couple of other fun interpretations.

The winning costume, though, is this Transformer. Thanks to Stink for sharing!

It wasn't until I pulled into the bank parking lot that I realized why my eyes were irritated. It wasn't that I was wearing my glasses for the first time in a long time (I generally don't need them, but have them for distance when I want to see really clearly). It was that I was wearing them instead of the sunglasses I would otherwise have put on the instant I walked outside.

Deposited the belated check from an article I finished four months ago (had to send my editor a reminder copy of the invoice a few weeks ago) and the $1.59 dividend check from one of my stocks (woohoo!) and got some cash, then headed over to the Rite-Aid to pick up some candy. It's going to be nice out and pretty warm this evening, so I bet the trick-or-treating will come in heavy waves for three hours.

Speaking of the Rite-Aid, the new store across the street from East Hill Plaza was scheduled to open Thursday morning, but they had to push it back a week. Apparently they couldn't get a certificate of occupancy because of a lack of sprinklers! How do you build a new building without knowing exactly what an inspector's going to need to see?! So, the old store, which was supposed to close tomorrow night, has pretty slim pickin's throughout. There were already some empty shelves last week. I wonder if they're going to do any restocking... or maybe bring a few cases of stuff across the street from the store they can't open.

After my brief reference earlier,

emaline412 suggested someone should explain Samhain. I'm probably not the most qualified to do so, but since I brought it up...

The festival came to be a time to honour the dead, especially those who'd passed in the last year, and beliefs evolved that, from sunset to sunset on that day, the veil was thinnest between the worlds of the living and the dead, or that a portal would open, allowing the dead to walk among us.

It's hard to trace the traditions definitively, but it's pretty likely that Samhain is at the core of such diverse observances and holidays as Dia de los Muertos (the Mexican "Day of the Dead" holiday), Halloween, and All Souls' Day.