A lot of today's news is about travelers stranded by the hundreds or thousands at Denver International Airport (thanks to major snowfall) and at Heathrow (thanks to freezing fog). Even if you're not flying into, out of, or through one of those airports, they could have a big impact on other flights throughout the U.S., the U.K., and Europe.

I hope everyone who's traveling over the next few days for the holidays gets where they're going safely and in a timely manner! It's scary to hear about the folks in Denver who're being told they probably won't get to their destinations until after the weekend, even though the airport is resuming flight operations in a few hours.

Bad weather's affecting a few more travelers, as Discovery is scheduled to land today. NASA hopes the shuttle can land at Kennedy Space Center in Florida (the best option), or Edwards AFB in California (more expensive in time and expense to ferry the spacecraft back to the east coast), but they may have to go with the third-choice White Sands in New Mexico, because they need to land today or tomorrow. If they land at White Sands, they'll have to fly the heavy equipment there to prep the shuttle for its trip home.

I went to Rite-Aid to pick up a prescription when I was done at the radio station this morning, and since it wasn't ready yet, I pored over the sale flyers. It turns out Rite-Aid is having a four-days-only sale that ends tomorrow, with some awesome deals! I got a couple of large jars of Planters Peanuts, $2.99 instead of $4.99, and a couple of big cans of Planters Whole Cashews; the $10 cans are buy-one-get-one-free. Nuts make a good snack and stop me from grabbing candy bars or anything worse, so I try to keep them around the house and the office. They also had Kashi cereals for $1.99 instead of over $4 a box.

Speaking of food that's bad for me, after I finished my morning shift I swung by Burger King. I was going to have a Croissan'wich, which I don't really enjoy because I find them greasy compared to an Egg McMuffin, but there's no McDonald's on this side of town. Instead, I was pleasantly surprised to find the Enormous Omelet Sandwich on the menu. I'd seen ads for these at some point, but this big sandwich of egg and cheese and sausage and bacon on a roll (the same rectangular one they use for the chicken sandwich) was a great change of pace... and much more to my taste. I also usually have to have two Croissan'wiches to feel satisfied, but this was perfect.

I also really like BK's Turbo coffee. It's not the strongest around, but it's strong enough for my tastes, and it's actually really flavourful. I haven't tried McD's new "Smooth or Bold" flavours yet, but I can't imagine either is this good.

The judges would also have accepted "Sir Mark the Prickly of Lesser Cheese Winston." But I really liked "His Eminence the Very Lord Mark the Sheepish of Llanfairpwllgwyngyllgogerychwyrndrobwllllantysiliogogogoch."

SOE was here when I got here, working on taking apart and reassembling my cube. (I intentionally did some errands before coming here.) I'm hanging out in the conference room until they're done, which I'm hoping will be pretty soon. I'd like to get a lot of moving-in and unpacking done before I leave today, so I can come in after the break and just sit down to work. 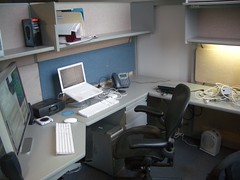 Getting set up
Originally uploaded by mhaithaca.
Mark's new office. They added overhead shelves, and replaced the 36-inch-deep desk panels with 24-inch ones. That's plenty; no 21-inch CRTs in 21st century computing. The end panel, next to the entrance to the cube, is a corner panel that'll let me sit at an angle to face my main computer; that's my laptop to its right.

My Winnie the Pooh books were placed on the shelf at top left (just left of the picture's edge) almost as soon as they were done in here this morning. That made it officially my office!
Collapse