Wednesday morning the 23rd was spent at the Louvre, a place that's so massive that the crowds must mean there are thousands upon thousands of visitors there at any time. It's amazing it works as well as it does.

I love the main Pyramide, an underground lobby that's new since my last visit, with a massive, glass and metal pyramid on top in the center of the building's vast, open square. They need to do a bit more work to air-condition that underground space, though! On sunny days, you can imagine what it's like under there.

Jeff and I got to visit La Giaconda and Venus de Milo, both easier than I expected to get to and stand in front of. One of the pieces that really grabbed me was an Egyptian statue that turned out to be halves of two statues put together... the legs of an ancient statue of Ramses II, with an 18th century trunk and head added in the style of ancient Egypt. The Louvre has quite a few Egyptian items, including a well-preserved mummy, unwrapped and on a simple cushioned stand inside a glass display case.

Here, too, was the first of several places where we've seen deep-underground exhibits featuring ancient Roman walls and foundations, and parts thereof. The Louvre was built on the site of some very, very old stuff.

While walking around on Wednesday, we visited l'Opera. It's not identical to, but clearly offered some inspiration to, the sets of "L'Opera Populaire" in "Phantom of the Opera." We didn't bother paying for a self-guided tour, since there was a rehearsal in progress and we couldn't have gotten into the auditorium. Pft. Also, they no longer sell ties in the gift shop, so I couldn't add to my collection of Paris Opera ties (currently standing at one, purchased there in 1989).

From there we continued to l'Orangerie, a beautiful museum building built on the site of the former orange groves at the Tuileries. Nearby was the Hotel de Crillon, an ultra-posh hotel where the doormen once turned my parents away when they tried to walk into the lobby to check it out. Parked out front, with guard ropes around it presumably to keep people from getting too close and drooling on it, was a bright blue Bugati. Pristine and shiny, and made the other fancy cars out front pale by comparison.

We headed back via Ladurée, where my mother wanted to buy some of their famous macaroons, and la Madeleine, the big Roman-style building that's a church to Mary Magdalene.

After two and a half days of no Internet connection, a slow one at the new hotel in Normandy. It's approaching 1:30am, and wake-up call will be in six hours, so I'll probably stop trying soon. I've managed to download a few hundred of the 1600 or so messages waiting in my mailbox. Just a little over 1200 left, which means I've caught up to about Saturday night. Don't be offended if you haven't heard from me. I don't expect to be completely caught up again for a week. :-\ 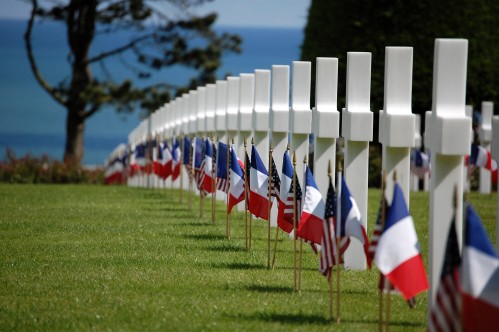 Dinner Wednesday was at Tante Louise ("Aunt Louise"), a wonderful restaurant that had formerly featured the chef you probably heard about who killed himself a while back after losing one of his Michelin stars at his next restaurant. Or something. My foie gras appetizer was probably the best one of the whole trip, and the roast pork main course was outstanding. I also really enjoyed the dessert of "fraîcheur de pomme," a stack of chopped, fresh apple topped with cream of some sort, served with a little sorbet.

On the way back to the hotel, we walked back through the Hotel de Crillon, where we'd seen the Bugati out front earlier. ( Collapse )
Collapse