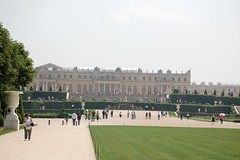 Our parents have been to Versailles recently enough that they weren't interested, so Jeff and I took the train out to Versailles on Friday. This involved not just the Metro but the suburban RER... easy enough, as there's a line that terminates at the town of Versailles, a reasonable walk from the palace and grounds.

That they filmed "Marie Antoinette" here is especially impressive given how much they must've had to hide and remove in the way of little affixed placards, anachronistic window views, and so on. Of course, there are plenty of angles from which you'd never know a thing. In the many photos I took here, I managed to make many of them appear as though there was no one else in the room, even though this was by far the most populated attraction we've been to. Good timing, good angles, and it helps that I'm tall and have long arms.