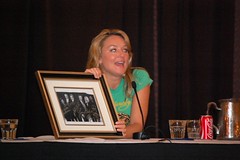 Yesterday was the first day in exactly three months that I didn't post anything here. I did manage to get some con time in yesterday, the highlight of which was definitely seeing Elisabeth Rohm of "Law & Order" fame. She came across as very laid back, well-spoken, open, and friendly, and I got lots of good pictures of her. (Apparently, I also uploaded one of them twice last night after I got home.)

She spoke glowingly of Fred Thompson, who she thinks would make a great president despite his (public) politics being far to the right of hers. And talked a lot about Jerry Orbach. She brought with her this photo, bearing his autograph, that's very special to her.

I was taken by surprise seeing her name in the program book; I hadn't realized she had a role on "Angel" for a while. Gotta watch some of those episodes, since apparently she and David Boreanaz had a great chemistry.

Easy and uneventful trip back yesterday, including a couple of hours en route to, and at, the airport with

dakotagrrl and her friend Anika. I'd forgotten I was on the "early" 8:50pm flight back from PHL to ITH, so I was home by 10. Still had time to enjoy a club sandwich and a pint at the Independence Brewpub between terminals in Philly.

A heck of a weekend, about which more later.
Collapse