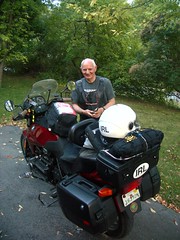 Here's a picture I shot the other night of John and his bike, just after he arrived at my house. He's really done quite a bit with the CouchSurfing concept! He's only stayed at a handful of CS members' homes, but he's hosted a few dozen at his.

Apparently, one of the couchsurfing couples that visited him a year or so ago (from Italy, of all places) had strongly recommended visiting the Ithaca area, so that's why he wanted to stop here on his way from the friend's house in Florida to the cousin's place in Toronto. When I first got his note a few weeks ago, I carefully responded as I have to any foreigners who ask to stay here, to make sure he was aware that I'm nowhere near New York City. One mother wanted to visit with her son, but changed her mind when she learned Ithaca isn't exactly a Manhattan suburb. So I was amused to discover that Ithaca wasn't just a random stopping point en route, but a quite intentional destination.

I really had a good time chatting with John and helping him explore the area a bit. It's a shame his wife passed away a few years ago, since from his stories she sounds like she was a lot of fun. His girlfriend sounds interesting, too, though. :-) I love the fact that, as a retiree, he's just taking it upon himself to get out and about and see parts of the world he's never seen before. This is only his second visit to the U.S. (his first was last year), and next year he hopes to fly back to Toronto to pick up his motorcycle (which is staying in Toronto at his cousin's) and head for the Pacific coast. I told him even if he won't be passing through New York on that trip, I'd do my best to meet him for lunch in Hamilton or wherever as he heads west.

One of these days, I really have to get to Ireland. It's been on my list for a while (I need to stop by St. James's Gate to say thanks) but now I have an even better excuse. And, I'm told, a place to stay.

I've just exposed Joost to "The West Wing." The pilot episode never gets old, and I'm always impressed by what a masterful job of choreography they did, so to speak. I think we've got a new convert.

Of course, the best episode, IMHO, is "Galileo." I can watch that three times in a row. It always lives on my laptop, just in case I get the urge! Which, go figure, I just did. But I won't watch for long. I need to get a good night's sleep. 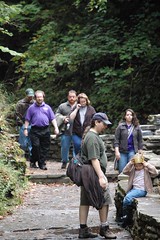