[The night of the 26th was actually when I really first started writing all of the daily trip logs.]

We left Paris this morning to head into Normandy, and despite the cloudy and foggy weather, had a nice drive to Les Andelys, a pair of small settlements (Le Petit Andelys at le Grand Andelys) that grew together long ago. We had an extraordinary lunch, all of us picking soup and massive salads at the Brasserie L'Hotel de Ville, and strolled into the local church. It was built in 1225 on the ruins of the first Norman abbey, which was begun in 581 by Queen Cotilde, the wife of Clovis.

We then continued up the hill to the Chateau Galliard, an incredible fort overlooking the Seine, ordered built in 1196 by Richard Lionheart in order to prevent French troops from progressing up the Seine into Normandy. A few years later, King Philipe had managed to defeat the barricade and Normandy became part of France. Some of the castle is reduced to piles of stones, but lots of pieces of wall are still standing, or in a few places have been restored.

Also on today's agenda was a visit to the museum and cathedral at Evreux. The best part of the museum for me was the lowermost level, with incredible archaeological artifacts and exhibits, displayed alongside the inside of the Roman battlement wall the museum (formerly a parish building) was built atop.

We're now at Manoir des Saules, a lovely, luxurious, and wholly impractical hotel in a small town. Jeff and I are in a "room" that actually has a bedroom, a small sitting room with a twin bed in it, and a bathroom. Jeff kindly volunteered to take the smaller bed in the smaller room, since with its headboard and footboard, there's no way I'd fit. I'll have to get past him and up squeaky stairs to get to the bathroom, though! On the positive side, we won't be snoring at each other.

Our room is adjacent to our parents', up a narrow set of outdoor stairs that would be a lot more convenient in better weather! My mom's not thrilled with the stairs, especially after a week of walking. The place is certainly beautiful, though; the rooms are luxurious and comfortable, and dinner downstairs tonight was amazing! A couple of men own the place, and one of the owners "presided" over dinner... actually running the show and acting as waiter for every table (there were around eight) while a staff of underlings carried the food, etc.

It was yet another huge dinner, and I'm not looking forward to getting on the scale when I get back to Ithaca! I'll have just a few days (including my birthday) to eat reasonably and lose a pound or two before heading to San Francisco -- where I think I'll try to be a lot more moderate than usual.

Even though it was after 11, I took a walk after dinner for about a half mile down one of the roads near the hotel. I stayed in a straight line rather than risk getting lost, though there were clear sounds of nightlife off to the left of this otherwise residential area. I've walked 48 miles in less than five days, which ought to help lessen the inevitable weight gain.

The TomTom got its first workout today with my newly purchased map of France. Other than directing us through city streets to leave Paris, when my father decided to ignore the suggested route from the car rental folks, it did fine, and was especially helpful getting us to this small town that's not on the maps and for which the hotel's directions were opaque at best. 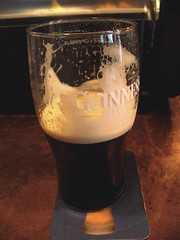 The old advertising slogan "Guinness is Good for You" may be true after all, according to researchers. A pint of the black stuff a day may work as well as an aspirin to prevent heart clots that raise the risk of heart attacks. Drinking lager does not yield the same benefits, experts from University of Wisconsin told a conference in the US.

This monument in the Cathedrale Notre Dame de Rouen is actually to memorialize a guy you've heard of, if only in a movie starring a fox. Richard Lionheart, King Richard I of England, was buried in several different parts of France, and his heart is here in Rouen, in this tomb. (His brain is in Poitou, and his nerve is buried along with the rest of him, in Anjou.)

The last six pictures are dinner at the only decent-looking place we could find that was open on the religious holiday of Pentecost (bad enough that it was Sunday evening) -- the buffet at the Comfort Inn between La Tourville and Elbeuf, in the village of Cleon. More on that shortly. :-)

Steve would have appreciated the idea of walking into the dining room at Manoir des Saules, sitting down, and being served breakfast -- with no ordering taking place. Though it seemed by coming in at 8:30, the earliest we could eat breakfast, we missed out on the eggs; the kitchen staff were showing up around 9, and another table were served eggs.

We "made do" with several kinds of rolls and breads, sliced ham, wonderful raspberry preserves, and assorted items like a nut pot de creme and something that was either yogurt or fromage blanc, a cross between sour cream and cheese.

The lack of bathroom door seemed odd, but I figured there generally isn't someone sleeping in the adjacent small room. Now that the curtains are open, I've realized that there is a door... a pocket door that slides out of the wall. Ah well. I'll close it tomorrow morning. A little odder was the handheld shower with nowhere to mount it, and no shower curtain.

This morning was the first time my Birks seemed dry enough to put on, after Friday's drenching, but after breakfast I decided it was too cool for them, and put on socks and sneakers. I only have a couple more pair of clean socks with me! Hope I don't have to do that too much more.
Collapse