Got up at 10:30 this morning, and lazed around a bit before bopping down to the Queen of Tarts to see if there was some soup. Lowell heated up some of the creamy chicken with rosemary, and I relaxed with that and a chunk of baguette while he cleaned up. At 1, Leslie came in to close up with Jonathan in tow, Steve stopped in with his kids briefly, and Paloma popped by for something on her way out of town, so I got to see everyone and wish them a Merry Christmas. I miss seeing Steve regularly! He's fun.

No baguettes left, but I scored a pumpernickel rye loaf, which I'll eat over the next couple of days with the rest of the chicken salad and chicken soup I made with the remains of the roast chicken.

Jonathan was getting on his mom's nerves, so since he's in the middle of learning how to drive, I took him across the street and we took advantage of the empty parking lot so he could learn the basics of driving stick. I think it's always important for people to learn stick; you can always drive an automatic if you know how to drive a manual shift car, but the reverse is far from true!

I'm at the office briefly, and I keep hearing doors, but haven't spotted any actual people. Pretty sure the building's not haunted.

One of the random Amazon.com gift certificates I'd gotten by e-mail as an affiliate program payment expired before I used it, sadly. I asked Amazon if they'd reissue it, but they said no. Ah well. I need to see if any more Amazon credit card reward certificates are floating around the house in their annoyingly generic envelopes. Still haven't bought either an HD-DVD player or a Blu-Ray player with my gift balance (though I used some to buy a belated gift), but I'm also considering getting an external hard drive for my TiVo HD, so it can record more HD shows before running out of space.

Merry Christmas to one and all!

Who'd have believed I wouldn't be the first member of my family with an iPhone? My mother just got one... a hand-me-down from my cousin, who passed it along when he got a new one. (I'm guessing he decided 4GB wasn't enough space for his tunes, so he grabbed an 8GB model.)

Believe it or not, my dad decided he wanted a cell phone, too, so they're adding a line to my mom's AT&T Wireless account and he's getting a free RAZR. Happily, they can do all of this online, including activating the iPhone in iTunes, so they don't need to go anywhere near an AT&T store during the holidays.

You'll be relieved to hear I finally saw the coworker who's sharing the building with me this afternoon. I won't be here much longer! Just relaxing and doing some web updates.

There's a Flickr Best of 2007 discussion, and they're selecting some of the submissions to feature in the Flickr blog. I don't know if any of mine are that good, but I do have a few pictures this year that I'm really happy with.

Any suggestion as to which picture from this batch, or the rest of my photostream, I should submit? What's your favourite?

Le 1900 was closed, as are many places because it's both Sunday evening and Pentecost, so we headed for the highly recommended restaurant listed in the Michelin, La Tourville, in the town La Tourville sur la Riviere. Sadly, when we tried calling we had the wrong number; the folks we reached said they'd gotten multiple calls from people with the Michelin guidebook. When we got to the restaurant's address, there were signs for a hotel and a restaurant, but the gates were closed. If this restaurant was there, it's closed tonight. 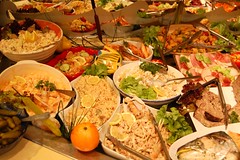 On the way back to Elbeuf, we saw a sign for a Comfort Inn hotel with a restaurant, and decided to take a chance. What a great find! Not so different from a typical hotel restaurant (though a consumer-level hotel in the U.S. rarely has more than a breakfast room), with a big appetizer buffet and dessert buffet, and a menu with a variety of northern French specialties. There was lots of seafood on the buffet, including large peel-and-eat shrimp that I skipped. I think nothing of looking at and eating around a fish's head, but for some reason I don't feel like ripping a shrimp's head off with its shell.

Anyway, for 20€ each person gets unlimited cold appetizer buffet or one of the appetizers from the menu, a main dish from the menu or the daily special, a cheese plate, and a dessert from the menu or the dessert buffet. Delicious, fresh food and plenty of it. The buffet included a wonderful coarse country paté, several kinds of seafood salad, and lots of veggie salads, rice salad, etc., much as you might find on a thorough salad bar. Everything but actual salad... which came with the cheese. Certainly nothing fancy, but after literally five nights in a row of fancy dinners, that was OK by me. I still ate well.

Aha! I just realized from looking at the hotel's brochure, which I took along, that the restaurant used to be called Primevére, which was one of the ones the TomTom thought was near there. It's now Le Seino-Marin. The hotel, should you want to find it, is the Comfort Inn Rouen-Sud Cléon, 15 rue Charles Perrault, in Cléon. Right off the A13 between Paris and Rouen.

We're probably going back there for their breakfast buffet, and to enjoy a little of their complimentary wireless. The hostess (the desk is for the hotel as well as the restaurant) showed us a couple of the guestrooms after dinner. They're certainly no-frills motel rooms with small TVs and little extra, but they'd be perfectly serviceable as a place to sleep between sightseeing jaunts around Normandy, which is the point. It was 53€ a room for one or two people, 8€ more for a third person. (Not sure where you'd put a third person.)

Canal 1 seems to be showing "Titanic." Fun. David Warner is chasing Jack and Rose through the bowels of the ship... in French. Perfect dubbing voice choices! Youthful and sweet. Woo! As I finish filling in bits of the above, the ship has just hit the iceberg. This isn't a huge TV, but even from across the room I can tell how much better-looking French analog TV is than American. And hey, Sidney Bristow's dad from "Alias" is the ship's designer! I'd never made the connection.

We spent Monday, 28 May, visiting a series of abbeys in Normandy. We were also in transit from Manoir des Saules, where we'd stayed the last two nights, to Château d'Audrieu, a beautiful, renovated estate chateau in the Calvados region.

The abbeys included this amazing huge facility, largely in ruins, with portions of walls still standing.