The unassuming New Zealand beekeeper who conquered Mount Everest in 1953 to win renown as one of the 20th century's greatest adventurers, died Friday. Sir Edmund Hilary was 88. The lanky New Zealander devoted much of his life to aiding the mountain people of Nepal and took his fame in stride, preferring to be called Ed and considering himself an "ordinary person with ordinary qualities."

Bailey and I wandered to the other end of the Commons after sushi last night so I could snap a couple of pictures of the fire-damaged building at 102 West State Street (which contains Handwork and Ithaca Academy of Dance) before I drove her back up the hill. 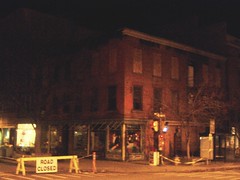 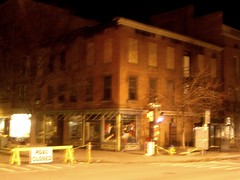 I took a couple straight, and a couple in "night mode" (long exposure on the camera, right-hand image above), and I think each version has its advantages. None were perfectly steady shots, though I held the camera against a lamppost to minimize movement. These are the less-blurred of each type.

Of course, if I'd had the Nikon with me, I'd have crystal clear shots... one without flash, and one with, since the flash would have successfully lit up the building from across the street.
Collapse