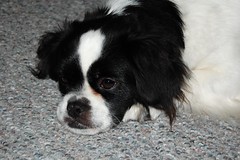 He knows there's been a squirrel in here, and he probably knows it's still in here somewhere. He's been unable to stay still since we came downstairs. He keeps running around, staring at the fireplace vents, and climbing up on the couch back with his front paws on the window ledge.

I bought a squirrel-sized Hav-a-Hart trap at Agway this afternoon, and it's sitting on the window ledge baited with some peanut butter. The squirrel has definitely been out a couple of times since I set it up, but he must not be interested. Maybe while it's dark out and he can't see the outside to distract him, he'll notice the peanut butter.