If you ever needed proof of that maxim, there you are!

I had a good time tonight at Pixel, and certainly enjoyed the delicious Hot Truck along with some tasty beer. The game projected on the wall looked fabulous, and nice as it would have been to have it in HD, it looked fine. At no point did I get the urge to go somewhere else to watch it in HD.

I did miss about a third of the game, thanks to today's jaunt down to Mansfield and Wellsboro to see my friend Theresa in the great play "Almost, Maine," actually a series of vignettes all set in this imaginary tiny northern-Maine town on one evening. (Many of you have met Theresa; she lived on Sheraton Drive near Laura and me, until she moved over to Penny Lane, and Denise moved into her old apartment. She's since moved to PA and she and Scott got married, and has also been studying/teaching at Alfred.) Her niece Rachel and I plotted for me to join them for the plays without Theresa knowing about it. She actually said she was thinking about e-mailing me this morning to say I should come down next weekend, but decided I'd never bother coming all the way down from Ithaca. :-)

Rachel and I had a great lunch first at the Wellsboro Diner, one of the few remaining old-fashioned lunch car diners. And after the show, we hung out with Theresa and Scott and Theresa's mom at their house up on the hill behind the family farm. I'd had a vague memory of having visited down there, but I was wrong. I was in town for their wedding, but definitely never saw the house. Even with the all-wheel-drive, I was glad the long, winding, narrow driveway was cindered! Don't want my car to spend the rest of the lease in her field waiting for the spring thaw.

I kinda meant to go to sleep earlier than this tonight, but got distracted by quite a few things. That's life. 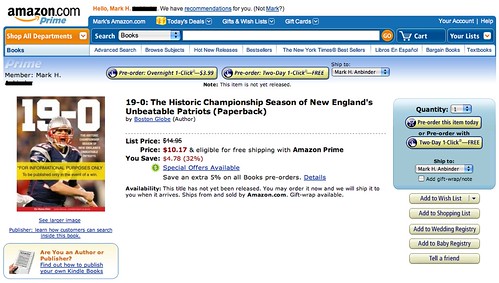 Someone should have a little chat with the sports writers at the Boston Globe about the advisability of preparing a "19-0" Patriots-fawning book before the season's actually over. Yes, I'm a Pats fan, but I know better than to count your chickens before they maybe score a couple of damn touchdowns. :-)

One of Improv Everywhere's coolest events ever... over 200 people suddenly froze right in the middle of Grand Central.