Photoshop Express is whizzy and flashy and pretty and pretty much utterly useless for actual users who might be inclined to share their photos. Even if you can get it to work, which it simply doesn't in Camino. Oops. 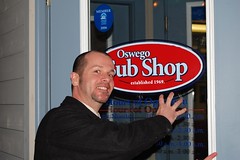 The Italian sub I picked up at

Oswego Subs the other night after dinner at

Rudy's Lakeside lasted for two full lunches, as I suspected it would. A $7 sub the size of my arm is a pretty good deal! I really miss their Ithaca outlet, which I guess was here longer ago than I thought. (At right,

When we were up there, the guy at the counter said he'd been the one who ran the Ithaca store, and while I wouldn't have recognized him on a random street corner, I was willing to believe him. :-) I didn't give him any shit about closing up shop and vanishing while still owing the radio station hundreds of dollars; not much point, since he declared bankruptcy and the debt legally ceased to exist years ago. At least he's back safely making subs where they're appreciated! Also took a picture of the framed pair of pictures on the wall, of the building in the late 1890s (when it was a meat shop) and a few years ago. Fun. 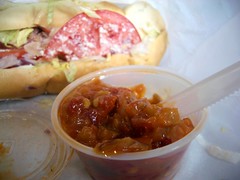 I'm glad I thought to order the sub with the dressing on the side, since the veggies made it wet enough after two days in the refrigerator. I zapped today's half for a moment in the microwave (my office refrigerator is a bit cold, and it was frozen) and then let it sit in the toaster oven downstairs for a couple of minutes, and it was perfectly good. The hot peppers, also thoughtfully provided in a little plastic container on the side, really made the sandwich! Did I mention I really miss their Ithaca outlet? I hear Wegmans makes great subs (I've had one, just not in a while) and I suppose I should give them another chance soon. Do they have hot peppers? I guess it's a marinated diced hot pepper relish, or something. Whatever it is, that and Rudy's meaty hot sauce make Oswego one of the junk food capitals of the world in my book.

I was completely unaware of these two recent instances in which local private individuals saved the lives of people nearby, because they happened to be trained in what to do, and were willing and able to act in a timely manner. Further documentation that CPR and AED training is invaluable. Are you trained? If not, see if your workplace will sponsor training for you. Mine does.