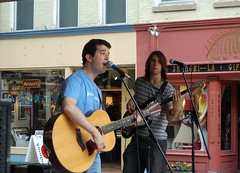 ...would you need to schedule a two-day "preview show" for a weekend-long festival that's in three weeks, on the off chance the locals might get confused about which weekend to show up downtown for music.

Nevertheless, it was nice to see Alan Rose and his new band play on the Commons this afternoon, and I also availed myself of the chance to get a hot dog from Lou Cassaniti while I was at it. Even successfully resisted the impulse to go get a second one. (Ordering just one at first was the key.)

The poor guys from Radio London were probably just starting when the downpour started; I saw the clouds rolling in and made for the car, even though I'd like to have stayed for their set as well.

Tasty dinner at a friend's, followed by "Valmont," which I haven't seen in ages. It came out very near the same time as "Dangerous Liaisons," and was overshadowed. I think this was the more believable film, though the other (with Glenn Close and John Malcovich, et al) was better written. Both were awfully pretty in both sets and costumes. Now watching game four on the TiVo.
Collapse