More detail later, but it was a terrific long weekend, including hosting a great IC with lots of friends in town, a terrific wedding, a pleasant hike at Taughannock Falls State Park, more hanging out with friends, pizza, and unexpected doggie sitting. I'm exhausted, so I'm off to bed. I'm sure Max will wake me up bright and early to go out! 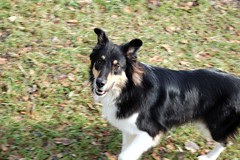 I can't really blame John, since he and Mary and the kids are living in a temporary house between selling their old house and finishing building their new one, but the directions to get to their house to pick up Max last night didn't successfully get me there. :-) Then I had to drive back towards Ithaca to get into an area with a cell signal, since they're out in Caroline. When I called, Mary answered, and said "Oh, no need to go through Brooktondale. Just take the first right off 79 past the Caroline elementary school, and we're a half mile down on the right." That worked.

Not sure what they're meant to be, but it's an interesting little cluster of small, colour-coded houses, in groups of three. There are three pink ones, three red ones, three grey ones... and they really seem to be roughly apartment-sized, except they're in a narrow, two-story arrangement. Interesting way to build apartments.

Claire called at 11 when she got back to town, and offered to come get Max, but I think she was relieved that I volunteered to let him stay the night here. She's not a late-night person! We'd already gone for a nice, long walk after getting home, and we both got drenched when it started pouring when we were just two blocks away. I took him out once more, briefly, before we went to bed, and we both slept well! We had another nice walk when we got up, and I'll drop him off at Claire's on my way back over to the Ramada to pick up a last couple of things and see who's over there. Max's people will be back from Albany later today. (Claire's his grandma.)
Collapse