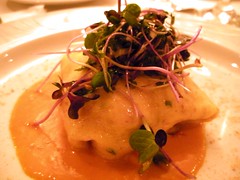 iamjanjan for joining me at tonight's Chef's Night Out, the awesome five-course fundraising dinner held by Ithaca Taste of the Nation.

Just a fantastic dinner. At right, the first course, a Maine Lobster Crepe with ginger-carrot emulsion and pea shoot salad, by Suzanne Stack of Suzanne Fine Regional Cuisine.The portions weren't so huge that we left feeling bloated, and the wine pours were small enough, really little more than tastes, that I needn't have worried about driving afterwards -- though having the designated driver was awfully nice anyway.

Lots of fun to see and chat with some folks; I see Larry and Trudy at hockey games (actually, more at hockey events and away games than games at Lynah, even though we're at all of them) but got to chat with Larry about flying and Trudy about dining, which was fun. Best of all was running into old friend and long-ago coworker Tim. We keep peripherally running into each other by e-mail, but I'm pretty sure I haven't seen him in person in over a decade. He has two cute little kids (he showed me pictures on his iPhone) and has not, in fact, gone back to vegetarianism after I helped him escape it one day. I'll tell that story sometime. :-)

As many of you may know I'm a member of The Church of Jesus Christ of Latter-day Saints. Some might conclude given my family's membership in the Mormon Church that our company supported the recent ballot initiative to ban same sex marriage in California. This is simply untrue. Neither I, nor the company, contributed to the campaign to pass Proposition 8. The Bible that I love teaches me about honesty, integrity and unconditional love for all people. But beyond that, I am very careful about separating my personal faith and beliefs from how we run our business.