Heading to the mall on the Sunday before Christmas for lunch seemed like a cataclysmically bad idea, but I decided to brave it, knowing I'd get to see a few folks who were gathering for "The Day the Earth Stood Still," and knowing I needed to pick up a T-6 torx screwdriver, anyway. The parking lot was fuller than usual, as was the food court, even at 1:30 after you'd expect the lunch rush to be over, but all in all, I thought the mall was surprisingly mellow. Not in a "Yikes, no one's spending money" sort of way, but in a "Hey, no one's being a manic, entitled jerk" sort of way.

The two people I was expecting to see there for the movie weren't there, but I enjoyed lunching with Alan and Will. Tragically, I failed my saving throw on the third-slice-of-pizza impulse, but the guy at the register when I headed back said "You work here, right?" and gave me the super-seekrit mall-staff discount. 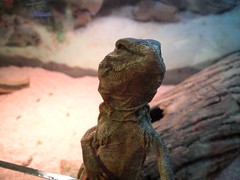 I'd already seen the movie on opening night, so as curtain time rolled around, I bid Alan and Will farewell, and continued on to the shopping phase of the visit. The crowds in the corridors notwithstanding, Sears was nearly dead, and it took me just a few minutes to find the handy set of tiny screwdrivers that included the size-0 Phillips head and the T-6 that I knew I'd need, along with a few tiny flathead bits, and check out. I Twittered a picture of the item in question, and my iPhone's location feature decided I was in San Diego! It was fun, briefly, looking at Twinkle's "nearby" tab and reading what people were up to in warm, sunny California, from eating breakfast to preparing for the Chargers game.

On the way back to my car, I stopped in Pampered Pets to visit the baby snakes and other fun exotic critters, and snapped pictures of the curious and friendly baby Mali Uromastyx (at right) and a cute green iguana. The snakes were mostly hiding, though one of the baby corn snakes had left a nice shed draped across most of the tank.

Speaking of movies, high on my list for the coming weeks are "Milk" and "Spirit," and I may also try to see "Valkyrie" and "The Curious Case of Benjamin Button." If any of you are interested in a traditional Chinese-food-and-movie Christmas, let me know!

I got everything successfully transferred from my MacBook to the new hard drive in Ron's hand-me-down MacBook ro this afternoon, and everything seemed to work, so I took it home.

Well, nearly everything works. The key to the right of the O key doesn't work, and neither does the Control key or the Otion key. I've been managing for the evening by using coy-and-aste with the missing letter, but this ost is much more amusing this way, don't you think?

I'm going to try taking the thing aart again and reseating the keyboard's ribbon cable, in case that does the trick. It's certainly ossible I didn't reseat it right when I installed the hard drive yesterday.

My P key now works again, as do the Control and Option keys. Now I just have to figure out how to tell the MacBook Pro to ignore the F8 key's function to toggle the keyboard backlight, and return to my use of it to toggle Twitterrific.

I do like the backlit keyboard quite a bit. That's a feature I've been wishing for since it came out, but it was never available in the low-end laptops I've been buying. Eventually, I'll buy myself a high-end MacBook or a MacBook Air, and I'll have that feature.
Collapse