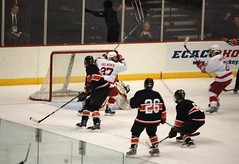 Colin Greening's gamewinning goal, about ten minutes into the second overtime period, to give Cornell the win over Princeton in the late semifinal last night! Cornell came from behind, trailing 3-1 late in the third period, to tie up the game with two goals in quick succession, and then stayed on it until Colin's goal.

Yesterday was a lot of fun... even watching the men's basketball game in Bayou Cafe! (I'm not into basketball.) Got to see quite a few people I don't see often, and enjoyed a healthy dose of hockey. Of course, there's more today! We'll be in the championship game at 7pm. You can watch on Time Warner Sports (in a lot of New York, at least) and, in some places, on NHL Network.

Time to hop in the shower and then have breakfast with Age and John.
Collapse