I've been in steam rooms before, but never in a eucalyptus-scented steam room before I tried the one at the hotel this weekend. It definitely feels odd! But it has the sinus-clearing effect you'd expect it to. :-) 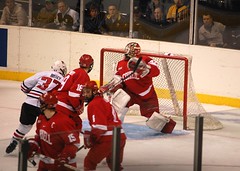 Quite a weekend so far, including a nice drive on Friday -- long, but easy and uneventful -- and a great day yesterday with friends, food, and hockey. And what hockey! Cornell has been doing a lot of heart-attack-inducing come-from-behind hockey lately, and yesterday afternoon's 3-2 win was just that. They were down 2-0, but Blake Gallagher got a single goal for the Red in the second period, and then Colin Greening and Evan Barlow each scored late in the third -- Greening's came with under four minutes left and Barlow's just 17.2 seconds before the end of the third. Northeastern must've been ready for overtime, but Cornell took it away.

I also took pictures and press conference notes for CollegeHockeyNews.com in part of the second game, after enjoying some food in the arena's bar with the gang.

Grand Rapids is pretty rainy today, as it was last night, so we're going to look for brunch in the building, and someplace to watch the early game not too far away. Tonight at 8 is the midwest regional final, Cornell vs a Bemidji State that pulled off a brash upset last night, beating Notre Dame 5-1. Tune in on ESPNU!

That's not quite an accurate way to put it, but the New York State legislature just approved a state budget that, among other changes, expands the state's beverage container deposit law to include bottled water. I guess we should all stock up on cases of bottled water before that goes into effect! (Not that I use bottled water that much, but it's nice to have around.)
Collapse