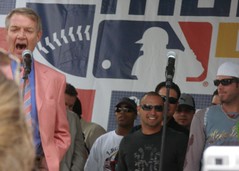 One of the legendary voices of the sportscasting world has gone silent. Harry Kalas, the longtime Phillies announcer and member of the Hall of Fame, died this afternoon after collapsing at the press box at Nationals Stadium just before the opening series at that ballpark. I was just there yesterday. Now I especially wish I'd grabbed one of the Nationals-Phillies opening series t-shirts!
Collapse