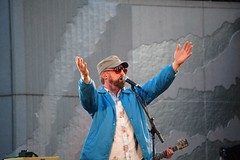 To be honest, I was much more impressed with Barenaked Ladies last year, but I did enjoy last Thursday night's Cake concert at the WWDC Bash in downtown San Francisco. (One of many nice things about them doing the party at Yerba Buena Gardens now, instead of busing people down to Cupertino, is that countless random passersby get to enjoy the show from outside the park.)

One of the rumoured acts was Dave Matthews Band, and that I would've really loved! The show two years ago, with Oso Matli, was also amazing even though I'd never heard of them.

After the show, Umung (a fellow Cornell alum I haven't seen in seven or so years) popped into downtown to have a drink, and we ended up all over town seeking food and beverages until almost 2am. What a treat to see him! He hasn't changed much, though now he's a lawyer instead of just a fellow Cornellian and science fiction fan. :-) (Oh, and a fellow Audi driver. We zipped around town in the '99 A4 he'd just picked up a couple hours earlier.)