Last night's dream, to which I woke up at about 6:15am, featured a decision that trivia night at Pixel last night hadn't been enough, so clearly I should drive down to the other Pixel, in Owego, for more trivia. No, there is not another Pixel in Owego. It would be a far more interesting town if there were. Or if alcohol sales didn't stop at 1am, since I arrived well after that.

stephania1186 was on hand to show off her latest photos, and Sarah had popped in from Denmark to enjoy them. I hope Sarah popped up to Ithaca for a visit while she was in the area...

The premiere of "Smallville" feels like it was just yesterday. It wasn't, though; its pilot premiered in May, 2001, and the first season kicked off a few weeks after 9/11, starring a twentysomething Tom Welling who now, at 33, seems even less appropriate to the role of a teenager. (At least Clark and friends finally graduated from high school.)

The series has had its ups and downs, to be sure, and while at first I joked about it coming off as "Superman: 90210," I have to say the producers have always had an eye on the legend in whose shadow they played. The series was always meant to be about Clark Kent's life before Superman, but it's always been clear what they're heading towards. 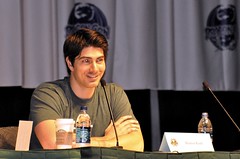 Coming up? "Smallville's" tenth and last season, and this new trailer says a lot both about where the series has been, and where it's going. As we build inexorably toward Superman, I can't help but think it's a shame the still-hypothetical sequel to "Superman Returns" won't be ready to fly next year, timed for a convenient hand-off from the CW. Brandon Routh is staying in shape. Let's put him back in the blue suit for another go.

(P.S. Is there anyone who didn't wonder where Superman was when the word spread of a bomb threat at the Eiffel Tower yesterday?)
Collapse