I had conversations with two people on Saturday that ended up taking a more similar direction than I'd have expected them to. Both ended up being about routine.

The first was the strong suggestion that someone should add a shower to his morning routine. (Yes, if you think you know who I mean, you're likely right.) I started out by saying that paying more attention to hygiene would stand him in good stead in group situations, but we ended up talking about how changing routine is difficult for him.

He also expressed the concern that he could make a serious effort to improve his hygiene and would still find that he had trouble being accepted. I told him there was nothing automatic or magic about becoming likable just by taking showers regularly, but that not keeping up with basic hygiene was a serious impediment to social acceptance that he at least had some control over. The rest could follow.

The second was a friend who needs to get in the habit of taking daily medication, and for some reason has not been able to get that into his daily routine. (Yes, if you think you know who I mean, you're likely right.) He's considering a new attempt to get back in the habit a tribute to a friend who just died of a stroke that could have been due to a treatable condition, and if that does the trick, I'm all for it. I explained that I made the medication I need to take daily part of my morning routine. Get up, go to the bathroom, take a shower, brush my teeth, take all my vitamins and this medication, etc., etc. Setting an alarm clock for a particular time as a reminder to take the meds seems like it's not something that could possibly work as well, unless you can always be sure you're not going to be in the middle of something else at that time. (And, in fact, it's his current approach, and it's not working well.)

There are probably things I could do better, or more reliably, or what have you, if I managed to make them part of a routine. Maybe I'll make a list. 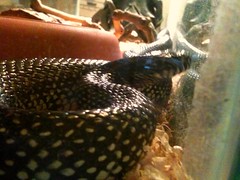 I finally got a cover for the awesome, larger tank I got from Mike months ago, and moved Charlie (and her stuff) to it yesterday. She spent lots of time last night and today exploring it, and stretching out. It's the same width, but a good foot longer, and not quite as tall. She's lots longer than when I got her about three years ago (I think), so the old tank was no longer really cutting it.

She was also out for a bit of a visit yesterday. I figured it would be a tiny bit less jarring for me to take her out of one tank, play with her for a while, and then put her into the other, with all her familiar stuff in it, rather than just move her straight from one tank to the other.
Collapse