I can't get over what a cool little kid Laura and Jim's son Steven is. He's talkative and manages full sentences and some pretty impressive concepts, considering he's two and a half. He's also sweet and smiley and happy, and even the meltdowns I've seen have been mild and brief. 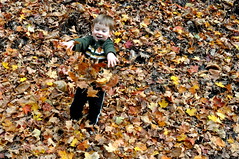 Yesterday, I dragged myself out of bed early to join them for a run over to Lamoreaux Landing, where Laura used to work. They wanted to be there when the winery opened at 10, so we left from their hotel across town at 9:15. *shudder* The day also featured a great hike along the nice, level trail at Taughannock Falls State Park, and a lunch stop at the Glenwood Pines on the way back.

The rest of the afternoon, I relaxed, watched some TV, and edited photos from the last several days, before heading over to the hockey game. The team looked great! To be fair, they were beating up on a bunch of kids... the Team USA Under 18 team is all younger, lighter, and shorter than our players. Still, the second decisive exhibition win in a row felt good, and the shutout for Ithaca native Andy Iles, who until this year was on Team USA with some of these guys, was a great capper for the evening. Iles made some very good saves, and showed none of the lapses we saw last weekend in the Red-White Scrimmage. I have to say, those slips last weekend are good for him; the shutout can now leave him confident, rather than cocky.

One of the highlights of last night's game was watching the girl in front of me eat her three-course dinner! She first ate a wrap, which I didn't think much about. People bring sandwiches and the like to Lynah all the time. But then she pulled out a sushi assortment, opened up the soy sauce packet, and started chowing down. Perhaps odder still? The last thing she took out was a fresh boule of French bread, which she proceeded to rip up and eat half of.

This left me with a sushi craving, but the rainy weather after the game didn't really make me feel like heading to Collegetown to get some take-out sushi and join people at the bars, and the P&C deli had none of their usual prefab sushi in the case when I swung by there on the way home. I opted for hummus in a pita when I got home. (I may eat more of that for a snack later.)

Today's quiet. More photos, some football, and some cooking. I need to practice my hollandaise sauce! Today's was too thin. No plans at all for the afternoon or evening other than that. Though I may try to find some sushi. :-P 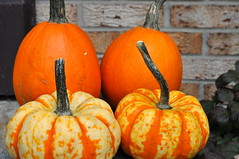 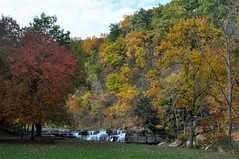