"Take your Kid to Work Day" doesn't usually mean much for me, other than the sharp increase in the number of short folks on campus. (Honestly, a coworker's kid or two is not an odd sight in CIT buildings, so it's not that much of a difference from the norm, at this end of campus.) 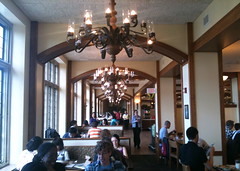 Today, though, I was invited to join a coworker and his nine-year-old for lunch on campus at one of the dining halls. The original plan was to go to Appel Commons, out on north campus, where I'd dined with

dyanearden a few years ago, but Nathan decided central campus would be better. I hadn't eaten in Okenshields, one of Cornell's oldest non-dorm-based dining halls, in quite a while -- maybe even since I was a student.

I'm sure there was the occasional faculty or staff member eating in the dining halls with students when I was an undergrad -- not counting the intentional eat-with-a-prof events -- but I don't think I ever really noticed. Today, there were some fun reactions among the students to the swarms of little kids and what has to have been an unusual number of folks twice the students' age.

chesther and I popped up to RPCC Dining, also on north, a few times when we both worked at CCC, I know I've been to a couple of "all-you-care-to-eat" dining halls (including that one) at other times, and I often eat in one or another of the "cash a-la-carte cafe" operations, but I really may not have been in Okenshields since I graduated. The feel certainly hasn't changed much, with a bit of a Tudor style, but the interior's been rearranged a good bit to allow for the multiple-stations style of serving that Cornell has largely moved to since I was a student. In a couple of places that's gone to extremes, with an Asian station, an Indian station, a salad bar, a grill, a deli stand, taco/burrito bar, pasta bar, and almost as an afterthought, a bit of more-traditional American fare. Here, they had a salad bar, a fruit and veggie station, daily dishes, a breakfast station, and over on the side, an Asian station.

The steam trays of scrambled eggs, home fries, and French toast caught me a little by surprise, though I already knew that Cornell Dining had realized they could a) make students happy and b) save a fortune by having cereal and milk available at all meals. It seems simple, but sometimes you just want some breakfast food no matter the time of day, and obviously Cornell has done well at filling that need. The grill I remember being around the corner is gone, and the deli station replaced with self-serve loaves of bread and chilled trays of cold cuts, egg salad, and the like. I'm sure the students are just as happy to put that stuff together themselves, and it has to save money on staff even if the average student will take a little more ham than they'd otherwise have gotten.

Today's entrees were roast turkey with mashed potatoes, stuffing, and gravy, and beef goulash with broad noodles. I opted for a little of each, along with a big salad and several of the veggies. Nathan had a seafood dish from the Asian station, some fried rice, salad, and a Rice Krispies treat. :-) Alex ate a roll and some fried rice and some salad, tried to convince his dad it was a good idea to have soda but settled for milk, and really seemed to get into the chocolate ice cream cone.

If I'm reading it right, staff on the "MealChoice" program, which lets you put money on your ID card to use as a debit account, pay just $6 for all-you-can-eat lunches. Since hardly any of the sandwiches or salads you can buy individually at the cash locations fall under $6, that's a hell of a deal! Might have to do it more often, though I'd try for times when there won't be long lines.
Collapse