The guy who pushed the "up" elevator call button a moment after I did must've been in quite a hurry. He pushed his way into the next elevator that opened past the kid coming out, and walked out onto his floor barely clearing the doors as they opened. 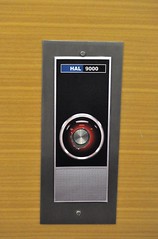 When we were having elevator issues several months ago, between quirky behavior and one or another of the elevators being down for maintenance, I talked about getting in the habit of walking up the stairs to the seventh floor, not just down, but while I've done it several times, it's just not practical on a constant basis -- especially when I've got heavy coat and heavy laptop bag weighing me down. I still walk down, especially when I'm going to lunch, but between the climb itself and the annoyance of all the locked stairwell doors, I'm not trying very hard to walk up any more.

There are still entirely too many people taking the elevator up or down one flight, but I sympathize with those who've discovered the doors aren't reliably unlocked if they try the stairs. (The able-bodied ones who've just never thought to take the stairs up or down a single flight? No sympathy for them!) 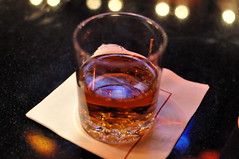 If you're not in a clicking mood, 50,000 bottles have just been released of Whyte & Mackay's careful reproduction of the whisky from the bottles of Mackinlay's Rare Old Highland Malt that were left behind by Ernest Shackleton's Antarctic expedition over a century ago. Shackleton and his team abandoned several crates of the stuff when they fell short on their attempt to reach the South Pole, and three crates were unearthed (well, I guess "uniced") in 2007.