Did you know some employers give their staff the day off for election day? I imagine in a major metro area where people's commutes can be measured in hours, rather than minutes, a day off would eliminate people's concerns about finding a way to get to the polls near home before or after work, or eliminate the need to submit an absentee ballot even though you're not out of town. 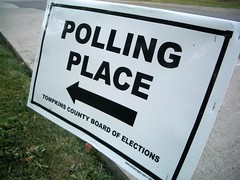 kinnerc opined last night that election day is the most important day of the year for U.S. citizens, and I don't disagree. Making it a day off from work and school could mean exposing kids to the importance of voting from an early age, and make it a family experience. I'm lucky that, for the moment at least, my polling place is a block out of the way from my usual commute, and it's easy for me to pop in on the way to work or, since it's three minutes from campus, anytime later in the day. I realize not everyone is quite that lucky.

A friend just checked in on Foursquare at the Lincoln Street Diner, noting that it's his annual post-voting tradition. No doubt many eateries would be delighted to see more people develop such traditions.

I'll be helping out with WVBR's election coverage tonight, as I usually do, but what's unusual about today is that I used the write-in space on the ballot for what I'm pretty sure is the first time. Yes, I'm asking people to write me in for Town of Ithaca Town Supervisor. No, I don't expect (or even want) to win, but I do want to send a message to the unopposed incumbent, Herb Engman, that he can't continue to sit on his ass and fail to do his job for the next four years. I'm tickled at how many people have said they'd vote for me if they were registered to vote in the Town of Ithaca, or have helped spread the word about my "campaign."

That's what Tompkins County Democratic Party chair Irene Stein said to me when she saw me arrive with a fellow WVBR newscaster at the party's HQ for the evening, the Holiday Inn.

After the election results and speeches had settled down and Irene wasn't busy, I went up to chat with her. I explained that I wasn't trying to win, just send a message. If I'd wanted to win, I'd have started earlier than 3:00 yesterday afternoon -- and I'd have won.

The unofficial results from the Board of Elections don't show who the write-in votes went to, but they do show a total of 39 votes for Town Supervisor in the Town of Ithaca, to 1,244 for the useless incumbent, Herb Engman. That's a hair over 3% of the vote, and while that's tiny, it's half the percentage of votes the Republican candidate for Mayor of Ithaca -- who's been campaigning all fall -- got. (She had 230 votes out of 3,443 cast.) Interestingly, it's also more votes than the write-in candidate for 4th Ward Alderperson got, despite several days of campaigning backed by the Republican party.

Irene asked me what my issue with Herb was, and I gave her a brief summary, making it clear that the biggest issue for me was that he simply wasn't getting back to me despite multiple attempts, never mind actually resolving the problem I was seeking his help with. She says she'll speak to him about it, and I told her if he actually starts responding, I won't run against him again. :-) (Of course, now there's some risk I might be asked to run for something for real!)

Needless to say, I think I succeeded in getting my message across -- Herb Engman can't continue to sit on his ass and fail to do his job for the next four years.
Collapse