Two consecutive posts about sushi from two of my friends mean I'm now having sushi cravings, so I figured I should share them. You're welcome. 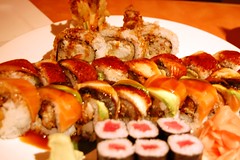 While I don't think I need (or can afford) a sushi-only diet between Thanksgiving and Christmas, I should definitely plan on getting some good sushi next week. (I think this week is spoken for.)

A great weekend full of hockey followed a week that featured a lot of time spent with a friend who was visiting family in town, to the point that my TiVo filled up. It hit 100% but I think I caught it just before it had to delete anything. Watched some TV yesterday, and I should do my best to watch at least a few more hours the next couple of nights, to make room for this week's shows! I'll probably also decide to ditch a few things, like the last two episodes of the now-canceled "Charlie's Angels" reboot. I was enjoying it, but it seems pointless to watch when I know the series stops short, instead of wrapping anything up.
Collapse