I had a consulting gig and kitties to take care of today, so sitting at home wasn't an option! 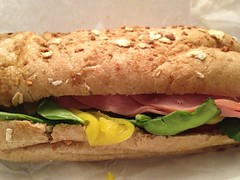 My rounds included cashing the check from guest DJing a few weeks ago, grabbing one of the $2 six-inch subs Subway is offering this month, and then popping over to South Hill to visit Age and Eva's cats. The sandwich was good -- I'm getting in the habit of eating less, so a six-inch sub was perfect, and the Cold Cut Combo is one of the ones I like anyway. Add spinach and tomato and banana peppers, and it's almost an Italian sub. (Their Spicy BMT is better for that, but that's not one of the $2 subs!)

I took lunch over to eat with the cats. They've been staying out of the way when I come over, which is usually true for the first couple of days. I guess their humans haven't been away long enough for them to be desperate for human contact yet. I may see them later in the week.

The consulting was for my longest-standing client, someone I worked with back when I was at the Apple dealer, and who stuck with me when I left. A few times a year, he needs help with one thing or another, and pays me well. (Several years ago, he told me I wasn't charging him enough, and made me raise my rate. He's a lawyer and a law professor, so I guess he can afford it!)

Then I met a few friends down at Five Guys for burgers and fries. Perfect! Since then, "The Sum of All Fears" and "Star Trek: Generations." I hadn't yet opened the Blu-ray of the latter, nor, probably, watched it at all in a decade.

The Blu-ray transfer is quite good, and the movie holds up well. Ron Moore and Brannon Braga and Rick Berman put together a film that manages to be a little bit of something for everyone, from original Trek and "The Next Generation," while even being somewhat plausible, and of course fun.

The styles of TOS and TNG are so different that it's actually impressive they managed to put a few of the characters together on the same "stage," even briefly. Shatner and Stewart, especially, are brilliant together. Even though the original cast had ceremonially handed the baton off with "Trek VI" three years earlier, I guess they decided they could do it again, more directly.

I went to sleep last night having watched a fraction of the special features on the "Generations" Blu-ray. Boy, you can fit a lot on those discs, especially when most of it is 15+ years old and was shot on video for DVD release, i.e. wasn't in HD. So, today I watched lots more of the documentary and interview stuff.

After dinner, I decided to watch "First Contact," which was actually the first purely TNG movie. Without meaning to, that made the weekend a James Cromwell double feature. (He was the President in "The Sum of All Fears.") He and Alfre Woodard, serious top-notch actors, really classed up this movie.

I don't think I knew that the Titan missile Zefram Cochrane turned into the warp-capable Phoenix was actually a real Titan missile, at an old missile silo in Arizona that had become a museum after it was decommissioned thanks to the START treaty.

I also got done some writing today, including a response to the person from the Downtown Ithaca Alliance who sent me a sort-of apology for having stolen one of my Chili Cook-Off photos from a few years ago to promote this February's event.
Collapse