I suppose I could branch out, but I probably won't. I'm having lunch tomorrow at the Cracker Barrel near Binghamton with a friend, and I'll probably just do my usual, and get Grandpa's Country Fried Breakfast. 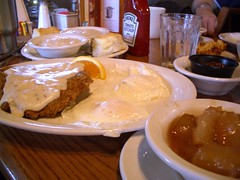 I was trying to decide whether anyone who's likely to read this (a shrinking population) might overlap with anyone who knows the friend I'm meeting up with, but I doubt it. Rachel's the niece of a friend of a friend, who grew up in Mansfield PA, and has been living in Vermont, and had a baby almost two months ago. I last saw her just about a year ago, when she popped over the border to join us for lunch in Troy in the middle of a hockey weekend, and soon after, she was pregnant! (Keep your mind out of the gutter. It was just lunch.)

She's been visiting family in Mansfield for a few days, and I was going to pop down there for a visit on Sunday, but the weather made that a bad idea. Luckily, it occurred to me to ask when she was driving back, and suggest lunch en route. It's an easier drive for me, anyway.
Collapse