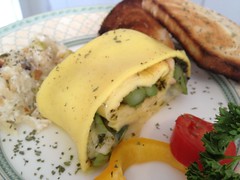 This morning's fruit course at the Inn was freshly sliced honeydew melon with a scoop of homemade lime ice cream. Nearly everyone opted for it. There was also a choice between apricot stuffed french toast and rolled omelet with asparagus, cheese, and pesto. I got to have a slice of the latter after breakfast was done. Actually, the same guest exclaimed that the potato casserole was the best thing she'd ever eaten. Reminds me a bit of Cracker Barrel's hashbrown casserole.

I noticed "Meadow Court Motel" came up on the CallerID when someone called this morning. They asked if we had a room available for two nights. Perhaps they were looking to upgrade. :-)

Getting up super-early to work the occasional breakfast is challenging, but I'm managing. Tomorrow morning, after tonight's grand finale at Castaways, I will probably be a zombie. It will be worth it.
Collapse