My boss asked me to pick up donuts on the way in for today's meeting, since the best donuts in town (at the P&C) are on my way, and I was happy to do so. When I got to the register with my box containing 13 donuts, though, and the kid asked if it was a dozen donuts, I should've just said "Yes." Instead, I said "It's 13, a baker's dozen!" 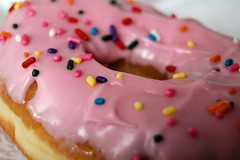 This threw him, apparently.

When the total amount he asked for looked high, I looked at the screen and wondered why thirteen donuts might be $8.97, when a dozen is $5.99. I asked him to fix it. I guess he had put in 13 donuts at 69 cents each, instead of ringing up a dozen and then adding one. Easy mistake, I guess, and, frankly, one the system shouldn't let him make. It should just know to make it a dozen plus one.

He had to call a manager over to override the incorrectly entered item, and then put it in right. Cider has gotten expensive, too! It's in short supply, so I wouldn't expect any sales this fall. A gallon was $6.99.
Collapse