Today's been a pretty quiet day at work. Two of the five in our office took the day off to get an early start on the family holiday, and the rest of us were focused on a potluck lunch we hosted for about twenty people from around the division. (Not sure how Karen decided whom to invite.) 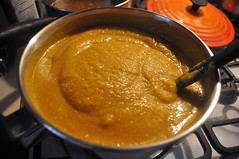 I made a batch of the pumpkin soup that worked so well at a Canadian Thanksgiving potluck two years ago, and it went over well today, too. It wasn't nearly as smooth, but I'll blame the odd texture of the pumpkin flesh, which felt much more like spaghetti squash than I'm used to. (This picture is from the first time.) There was also a turkey roasted in a portable electric roaster that's a lot like an oversized Crock-Pot, roasted broccoli, veggie lasagna, sweet potato risotto, some fun pineapple bread pudding sort of casserole, and a couple of pies.

The soup is vegan, but it's good anyway, I like to say. ;-) It's roasted pumpkin, vegetable stock or water, apple cider, maple syrup, and cashews blended in for creaminess and thickness, and that's it. I brought a cup down to Jeff at Louie's Lunch, but asked if he was allergic to cashews. Sadly, he's allergic to peanuts, and since Planters roasts their cashews in peanut oil at least some of the time, he didn't want to chance it. I gave his soup to one of the kids standing there waiting for his lunch, and Jeff at least appreciated the thought.

Last night was "Lincoln" with the newish friend from Saturday. Impressive movie with some stunningly good acting and writing. I recommend it, though I don't know if it necessarily needs the $11 big-screen treatment. Tonight I'll probably hit the happy hour at the Westy briefly to relax with some friends who don't usually have time to relax at bars (bar staff, for example) and then have a quiet night at home with my TiVo.
Collapse