I've been trying to get Penny out of the habit of either leaping on the bed (and me) early in the morning if I leave the bedroom door ajar, or sitting out in the hall trying to wake me up if I close the door, so she can join me on the bed. 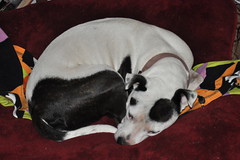 Letting her hop on the bed in the morning, after waiting to be invited, while I relax with the iPad seemed like a great habit, but she became accustomed to it to the point that she doesn't want to wait until I'm awake. For the last couple of weeks, she's been shaking in the hall, rattling her tags, which wakes me up, or whimpering. I've been carefully not letting her in when she does that, so as not to reinforce the unwanted behavior, but it's a hard habit for her to break, it seems... especially since even if I just open the door to tell her to go lay down, she knows she's getting a reaction.

Last night it occurred to me to try earplugs. Perfect! If she tried to wake me up this morning, or whimpered outside the door, I didn't notice. I slept until nearly 8, and was able to get up and go to the bathroom without incident. Keeping the bedroom door closed in the morning as I get ready for the day should also help her get out of the habit of getting on the bed when I'm not in it.

Maybe after she's stopped showing up early every morning, I can try occasionally inviting her to join me after I'm up again, or even letting her sleep in the bed all night. Maybe.
Collapse