There's been lots of good food lately, including my "free trial" ($20 shipping for four meals, which wasn't bad) of Plated, an Internet service that sends you raw ingredients and a recipe and you cook it yourself. Want to try it yourself? This link will get you a special offer, and get me a freebie.

But this week has been much more interesting, because I'm participating in Cornell Dining's "5 Days" initiative, in which management and chefs and a bunch of staff are following one of six restricted diets for five days and blogging about it. I'm on the Gluten Free team. 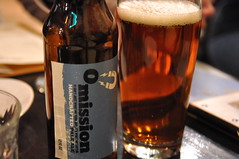 Now, it happens that as a relatively strict Passover observer, I'm used to keeping an eye out for grain and avoiding it. The result is that just avoiding wheat is pretty easy. I'm eating daily on campus, and blogging about the experiences on the 5 Days blog, but also eating gluten-free outside of work. Ithaca's a pretty easy town to do that in; we have some restaurants with separate gluten-free menus, including one of my regular spots. They've even got Omission, a gluten-free (technically gluten-removed) beer.

I'm glad I don't have to follow this restriction as a highly sensitive gluten-intolerant eater. People who risk anaphylactic shock from a speck of gluten wouldn't be able to have the gluten-free flatbread I had, which was cooked in the same wood-fired oven that they cook regular flatbreads in. They wouldn't be able to eat the wheat-free corn tortilla chips, because they're fried in the same fryer that wheat-breaded items go in. The most sensitive folks even have reactions to Omission, which is rated at one part per million, lower than the level where substances can legally be called gluten-free.

Honestly, I know I'm lucky. I'm allergic to cats, which sucks, but there's really nothing I can't safely eat.
Collapse