Merry Christmas! Does anyone else think the flurry of press coverage this week about a passenger who got booted off a flight at LaGuardia Airport for flipping out after one too many people wished him a "Merry Christmas" is nonsense? Most stories about passenger incidents include a name. Especially since this one seems to have started with the New York Post, I wouldn't be surprised if it were a "War on Christmas" hack job.

As has become tradition over the last several years, I joined

acappellasinger for the stereotypical Jewish Christmas of Chinese food and movies. I was really impressed with both "Into the Woods" and "Annie!" I'll be writing reviews soon. Since they're both adaptations of stage musicals, I might even work them both into a single article. Not sure yet.

Yesterday's Boxing Day brunch was a return to tradition; it's something I've done a few times, but not in a while. I think. Just a few friends, including

dansr's lovely little girl! Miss Rowan is really a gem, and of course the dogs love her.

Speaking of dogs, leaving shortly with Penny for another visit with Carter. Their first visit went very well, and I'm optimistic he'll be able to join our family soon!

I've put in the adoption application for Carter! Things went very well on his first meeting with Penny on Tuesday, better than any of the SPCA folks hoped or even imagined. All three of them were impressed at how well he took cues from Penny, and how good she was at giving them. She's really an amazingly well-behaved dog, which is why I was pretty sure this would work fine. Carter hasn't really known how to interact with other dogs, and she's teaching him. Today's session was great, too. 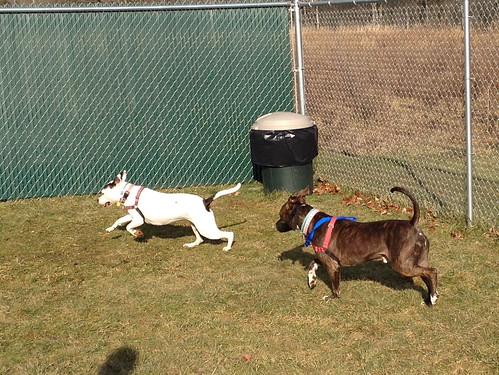 The SPCA folks agree that it would complicate things to introduce Carter to Rex, too. Since he's leaving in a few days, we're going to wait until Kaitlin comes and collects him before trying to bring Carter home. Then he can come settle into the house with just Penny, whom he's already (more or less) gotten to know. I think we'll also need to wait a while before introducing him to Gloria, Molly's pit who visits frequently for dinner or a weekend. Carter reportedly does fine when he runs into other dogs while out for a walk, but might not react well to random dogs showing up at "his" house. Once he's comfortable here, we can experiment.

This probably also means no more visiting my parents with the dogs. Unless Carter turns out to be every bit as chill as Penny was, I'll need to find him somewhere else to stay when I visit them. Molly is happy to take care of the dogs (I take care of hers often enough), and Carter has other fans who've offered to help! They did fine with just Penny visiting last year for Thanksgiving, but both Penny and Rex last month was pushing it.

So, with Kaitlin likely to be picking up Rex at the end of the week, it'll probably be next weekend before I bring Carter home. Count on more photos to come. :-)
Collapse