She mostly does go in her crate when I ask her to, though sometimes she's very reluctant or tentative about it. When she gets in her crate at feeding time, she often walks back out, then back in until I put the food in her dish, and then sometimes back out again to turn around and eat from just outside the crate. 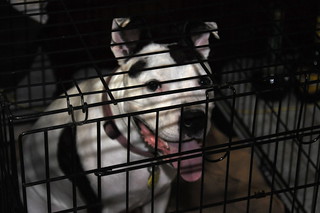 It's cute, but it's also a sign that she's having trouble remembering who's the boss. When Molly has helped take care of the dogs recently, Penny wouldn't go in at all at least once.

Once she is closed in the crate, I sometimes come home to find that whatever towel or blanket was folded up on the bottom to provide cushioning has been balled up and is in the water dish. That means the water's been soaked up and isn't available for drinking, and it means the fabric has to be dried out or it will get smelly and mildewy. Yuck.

Of course, it seems as though she rarely drinks from her water dish anyway! She much more often drinks from the one in the kitchen when they're not in the crates, and sometimes when I come home and open the crates she goes and drinks from Carter's water dish.

There's nothing wrong with her dish in particular. Not only have I washed it out and filled it with fresh water multiple times, I've even swapped her dish and Carter's, and she still goes for the one in his crate instead of the one in hers.

Realistically, she doesn't need to be crated. I can trust her outside her crate, which isn't as true of Carter. But while she's acting out isn't the time to tell her that. Once she's obeying better, I may revisit that idea, though I don't know if Carter would care that he's crated and she isn't. (He's such a good boy, and always heads right into his crate when I ask!)

First of all, I realize there are easier names for an American announcer to pull off than Vergé-Dépré, but your broadcast partner is coming SO MUCH CLOSER. Try harder.

Second, wasn't everyone griping about how the beach volleyball teams were wearing unnecessarily revealing bikinis? Where are the bikinis?!
Collapse