After most of a week in Paris, we picked up our rental car (a fantastic Renault crossover that I wish I could buy in the US) and set out for the Norman countryside. Saturday was spent at three wonderful sightseeing sites, and also featured what must be the best lunch we had the whole trip... a simple and delicious meal at the Brasserie de l'Hotel de Ville in Les Andelys. I had a stunningly good seafood bisque, this outstanding charcuterie salad, and a glass of Leffe, a Dutch (but Belgian-style) beer.

This was a beautiful town on the Seine near where major conflicts between France and Britain took place many times. After lunch, we headed up into the nearby hills to visit Chateau Galliard. This castle was one of the key battlements built by Richard I to try to defend Normandy from the French king, and you can see the ruins in these pictures.

From there, we moved on to Evreux, visiting a great cathedral and museum, side by side.

And, we ended the day at an awesome inn, Manoir des Saules, pictured here at night. It's owned by a couple, one of whom is the chef and the other acts as host.

Photos at Les Deux Magots, Musée D'Orsay, and Fermette Marbeuf
with the Eiffel Tower at Night

Thursday was our biggest walking day yet, starting with a visit to Sainte Chapelle and then lots of time at the Cathedrale de Notre Dame. I think the sign said there are 430 steps to the top, which certainly seemed plenty! It was well worth it, though, for the spectacular views of Paris and the wonderful close-up views of the gargoyles, spires, wooden doors, and the infamous bell. Before leaving the plaza, I went into the Crypt, which houses impressive archaeological exhibitions including the foundations of the area's original Roman walls.

We had lunch on the Île St. Louis, next to the large island at the center of the Seine where Sainte Chapelle and Notre Dame are. I enjoyed a very typical steak au poivre, i.e. with a very peppery sauce and a pile of crisp, hot fries.

I hadn't been to the Cathedrale de Notre Dame on Ile de la Cite in many years, but it hasn't changed much! I love the overall architecture of this mammoth building, and I love the incredible level of detail of such things as the gargoyles all over the building.

This next set of photos covers Sainte Chapelle, Notre Dame and the crypt beneath its plaza, lunch on the Ile St. Louis, and the Deportation memorial.

Wednesday after a morning and lunch at the Louvre, visiting the Gardens of the Tuileries and surroundings, the Place de la Concorde, the Paris Opera, l'Orangerie, the Hotel Crillon and the Bugati parked out front, and the Madeleine.

Tuesday night's walk through the Jardins Luxembourg, including the aforementioned marriage proposal, our first dinner in France at the Bastide Odeon, and a fantastic Wednesday at the Louvre.

Unfortunately, photography isn't allowed in the painting exhibits at the Louvre, so we couldn't take pictures of the Mona Lisa. La Gioconda was well worth the short wait to visit. She's smaller than you'd imagine, but definitely gripping.

Flickr really doesn't lend itself to sharing vast numbers of photos, so I'm going to use my old approach for posting photos to put up nearly all of the many hundreds of pictures I took the last two weeks.

Here are the first couple of albums, including some travel pics in the first, and our afternoon visiting the Eiffel Tower in the second.

Dinner Wednesday was at Tante Louise ("Aunt Louise"), a wonderful restaurant that had formerly featured the chef you probably heard about who killed himself a while back after losing one of his Michelin stars at his next restaurant. Or something. My foie gras appetizer was probably the best one of the whole trip, and the roast pork main course was outstanding. I also really enjoyed the dessert of "fraîcheur de pomme," a stack of chopped, fresh apple topped with cream of some sort, served with a little sorbet.

On the way back to the hotel, we walked back through the Hotel de Crillon, where we'd seen the Bugati out front earlier. ( Collapse )

Wednesday morning the 23rd was spent at the Louvre, a place that's so massive that the crowds must mean there are thousands upon thousands of visitors there at any time. It's amazing it works as well as it does.

I love the main Pyramide, an underground lobby that's new since my last visit, with a massive, glass and metal pyramid on top in the center of the building's vast, open square. They need to do a bit more work to air-condition that underground space, though! On sunny days, you can imagine what it's like under there.

Jeff and I got to visit La Giaconda and Venus de Milo, both easier than I expected to get to and stand in front of. One of the pieces that really grabbed me was an Egyptian statue that turned out to be halves of two statues put together... the legs of an ancient statue of Ramses II, with an 18th century trunk and head added in the style of ancient Egypt. The Louvre has quite a few Egyptian items, including a well-preserved mummy, unwrapped and on a simple cushioned stand inside a glass display case.

Here, too, was the first of several places where we've seen deep-underground exhibits featuring ancient Roman walls and foundations, and parts thereof. The Louvre was built on the site of some very, very old stuff.

While walking around on Wednesday, we visited l'Opera. It's not identical to, but clearly offered some inspiration to, the sets of "L'Opera Populaire" in "Phantom of the Opera." We didn't bother paying for a self-guided tour, since there was a rehearsal in progress and we couldn't have gotten into the auditorium. Pft. Also, they no longer sell ties in the gift shop, so I couldn't add to my collection of Paris Opera ties (currently standing at one, purchased there in 1989).

From there we continued to l'Orangerie, a beautiful museum building built on the site of the former orange groves at the Tuileries. Nearby was the Hotel de Crillon, an ultra-posh hotel where the doormen once turned my parents away when they tried to walk into the lobby to check it out. Parked out front, with guard ropes around it presumably to keep people from getting too close and drooling on it, was a bright blue Bugati. Pristine and shiny, and made the other fancy cars out front pale by comparison.

We headed back via Ladurée, where my mother wanted to buy some of their famous macaroons, and la Madeleine, the big Roman-style building that's a church to Mary Magdalene. 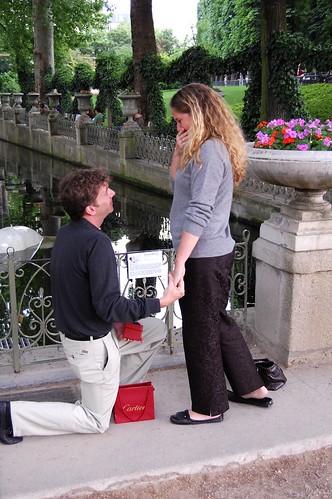 I'm glad to see that I got several good pictures of the happy couple last night! If you missed the story earlier, the man asked Jeff to take a few pictures with their camera, and then took out the Cartier bag and proposed. She's English and he's from Missouri, but they live in Panama.

A lot of walking today. Not sure quite how much, but it's a total of 19 miles since yesterday morning, according to my trusty Cornell pedometer.

Time to get dressed for dinner!
Collapse